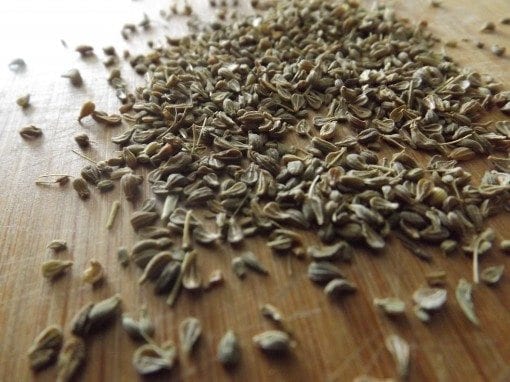 Anise  (Pimpinella anisum) is a plant belonging to the Apiaceae family. The oblong shaped fruits of this plant, which are more commonly referred to as anise seeds or (aniseeds seeds), are used all around the globe as a culinary ingredient.
The main reason behind the herbs popularity as a culinary ingredient is its amazing flavor. The incredible versatility of the herb makes it a great addition to tea recipes, sweet biscuit recipes, as well as savoury spice blend recipes especially with pork or duck.

Due to significant similarity in flavor, aniseed seeds are often confused with star anise and licorice. However, the fact is that the  ingredients are completely different from each other Anise seed belongs to the Apiaceae family. It is related to other common cooking spices, including caraway, dill and fennel.

Star anise happens to be a star-shaped fruit from the magnolia family. Licorice, on the other hand, belongs to the Fabaceae family. It’s actually the root of Glycyrrhiza glabra. The reason for which these three completely unrelated plants produce the similar flavors is the common flavoring compound present in them. Each of these three spices contains a substance known as anethole.

Individuals who are looking to experience the health benefits offered by aniseed seeds should start consuming tea prepared using the spice. Anise is well-liked for its licorice-like taste, which creates a sweet and enjoyable tea. Anise seed tea is not only pleasing, but it is also beneficial for relieving common problems such as an upset stomach and congestion.  You will just need boiling hot water and some crushed aniseed seeds for preparing this aromatic tea. For maximum benefits and savouring the flavor perfectly, have the tea without milk. However, many around the world also love adding milk to aniseed tea. Adding sugar or sugar substitutes is also optional.

Drinking an herbal infusion made from anise seeds can also be beneficial for common respiratory problems. As an anti-spasmodic, anise will help to ease coughing. With expectorant properties it can also relieve congestion, clearing mucus from airways. With good anti-microbial properties it is also helpful for fighting a bacterial or viral infection.

A steaming cup of tea can help with bronchitis, the common cold and any persistent coughing. here is a  delicious anise tea recipe

If symptoms are persistent, be sure to see your doctor.

Infusing crushed anise seeds in boiling water is a gentle, natural remedy for many digestive issues. Drinking anise tea is beneficial for gas, indigestion and an upset stomach. It can even be used to help with colic — a nursing mother can drink a cup of tea and pass on the soothing benefits to the baby. Another option is to give a child anise water with a medicine dropper, although always talk to your pediatrician first.

Anise seed is good for relieving digestive problems because it has anti-spasmodic and carminative properties, easing the stomach and supporting digestion. For stomach issues it blends well with fennel and caraway.

Drinking this aromatic tea regularly can also benefit nursing mothers. Anise seed encourages milk production due to a mild oestrogenic effect. For the same reason it may help with low libido and menopausal symptoms. This herb is safe for nursing mothers, but always talk to your doctor before using any form of herbal medicine if you are pregnant or breastfeeding. To help increase milk flow anise seed can be blended with fenugreek.

How to use Anise  seeds in cooking

Aniseed seeds produce a sweet flavor and are used to prepare a range of sweet and savoury dishes. Their use in beverages is also pretty common. You can heighten the flavor of these seeds even further by toasting them gently. The easiest way of preventing evaporation of the volatile essential oils of aniseed seeds is adding freshly ground powder of the same to the dishes at the very last moment.

We have already mentioned that the flavor of aniseed seeds is significant similar to that of star anise. Both have a sweet licorice like taste with a slight peppery touch. However, the flavor produced by star anise is significantly stronger than the flavour of aniseeds. That’s possibly the reason why star anise is mostly used for preparing meat recipes (especially those involving the use of pork and duck meat) and its use is comparatively uncommon in recipes for cookies and biscuits.

Anise seeds, on the other hand, are frequently used for preparing sweet treats. It’s in fact one of the most favourite spices of dessert chefs around the globe. Use of the ingredient is also common in biscuit and cookie recipes. Preparing basic anise seed cookies is extremely easy. Just add a spoonful of roasted anise seeds to a traditional sugar cookie base, divide it in cookie moulds of your choice, and bake. You will get a jarful of crunchy anise seed cookies. The butter added to the cookie base never competes with the characteristic licorice flavour of anise and allows the seeds to shine. These anise seed cookies taste best when served with coffee and makes one of the most popular sweet treats served during Xmas. You can try our favorite anise seed cookie recipe here

Anise is one of the main ingredients of Pizelle aniseed seed cookies. These cookies are prepared from cookie dough shaped using a specially designed Pizelle iron, which works like a traditional waffle iron (both help in creating a pattern on cookies). Other than creating a pattern on cookies, a Pizelle iron also helps in preparing crisp, thin cookies. The combination of vanilla extracts, butter, and anise seeds provide these cookies with a lip smacking flavor.

You can enhance the taste of steamed rice by cooking it with roasted anise seeds, raisins, and nuts. This recipe tastes best when served with a spicy side dish made using chicken or red meat.

Use of aniseed seeds is extremely common in Chinese recipes. The famous five-spice powder used in Chinese recipes includes both aniseed and star anise and two main ingredients; the other three ingredients used for preparing this spice blend are Szechuan pepper, cinnamon, and cloves.

Anise seeds gain significant popularity particularly during the Christmas and New Year. That’s because it is frequently used for preparing the spice mixtures required for making mulled wine and gingerbread, two of the most widely served items during the holiday season. You can use the spice even for flavoring savory stews. The seeds harmonize amazingly particularly with root veggies such as red cabbage and carrots, both of which are common ingredients of savory stews. You can also use anise for preparing waffle. Many traditional waffle recipes involve use of this flavorsome seeds. Aniseed waffle tastes best when served with a spoonful of honey.

What can i susbstitute for anise seeds?

Substituting the spices While it’s true that spice geeks will never be ready to substitute anise and star anise with each other in case one is unavailable. However, doing so is very much possible. As star anise has a much stronger flavor compared to that of the regular aniseed seeds, using a teaspoon of ground aniseed seeds instead of half a tea spoon of ground star anise had been found to help in creating a very similar taste.