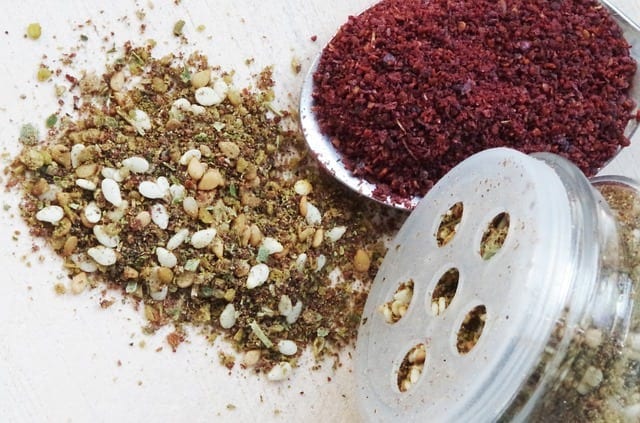 With its assertive flavour, Za’atar or Zaatar is a common ingredient in Middle Eastern cooking. It can be sprinkled as a flavouring ingredient on the flatbreads or used as a condiment in soups and curries. This is one of the most popular Middle Eastern spice blends used extensively in the dishes across this region. It constitutes a mixture of sesame seeds, ground herbs, and spices.

The mix of spices known as Za’atar contains herbs and seasonings that can add a wealth of taste to your cuisine and at the same time unleash powerful nutrients in your system to enhance your health. This spice mix became incredibly popular in the Middle East because of its culinary and health benefits. Soon it spread to other parts of the world as well.
Let us now talk about the strong points that make it an essential item in your daily diet.

The Main Ingredients of Za’atar:

Zaatar is an ancient heritage having biblical references as well. There are many spices that are used as a mainstay in the Za’atar spice blend. They include:

Apart from these, it can also include oregano and marjoram but these spices are optional.

To delve deeper into the composition and alluring mixture of a spice blend, it is essential to understand the history behind it. Zaatar has been associated with Middle Eastern cooking for ages. It has many references and a strong reputation to be brain food. In fact, in the 12th Century, a Spanish Jewish philosopher named Maimonides used to prescribe this blend to his patients for curing many diseases.

This flavour spice from the Middle East has been revered for its strong medicinal properties. The ingredients are rich sources of antioxidants. For example, sumac is composed of flavonoids while thyme and oregano are rich in thymol and carvacrol. Both these compounds have robust antioxidant and antiseptic properties.

Let us now talk about the strong points that make it an essential item in your daily diet.

Sumac, one of the crucial elements in the spice mix, contains quercetin that is able to destroy free radicals in your body and prevent the onset of cancer. According to numerous studies, sumac can really control the free radical damage by neutralizing them.

The expectorant property of thyme prevents the formation of phlegm and mucus that can cause respiratory tracts to clog. It also has many other immunity strengthening properties that can ward off several illnesses.

There have been studies claiming that regular consumption of za’atar in your diet can improve your brainpower and cognition. The spice blend contains circulation-boosting power due to its rich mineral content that can enhance your brain and incite neural activity.

You can not only add za’atar to your diet but can also make a paste or a salve that can be topically applied to the affected area for instant relief from painful joints and bug bites. It can have similar anti-inflammatory benefits when the spice is consumed through diet.

This is especially true if you are suffering from arthritis or any other inflammatory conditions.

The polyphenols and flavonoids found in this spice blend act as an energy booster that can get your metabolism fired up and keep you active throughout the day. Additionally, it also helps promote restful sleep that helps you feel fresh, preparing you to face each day with greater confidence as well as enthusiasm.

There have been studies that claim that za’atar can improve mood and reduce the risk of depression. The compound phenol found in oregano and thyme can have direct mood-enhancing benefits that make you feel optimistic. It can also improve cognitive function and make you sharper in your daily tasks.

In some cases, Thymol is also recommended for patients suffering from bronchitis to control their coughing fits.

How to Use Zaatar?

There are many culinary incarnations of this amazing spice. Most commonly, it is sprinkled on the bread, moist veggies, hummus, salads, and fruits. It has an aromatic and tart taste. It can be used as a dressing on salads or as a rub on meats. Many bakeries in the region offer flatbread with a pasty mix of olive oil and zaatar that is served hot.

However, when buying this spice blend, you should be cautious as there are some fake versions as well. In this spice, thyme is the primary ingredient. Hence, high-quality spices are processed to use only the soft leaves of the herb. They do not have any fillers or artificial ingredients. So, stay informed and choose the best.