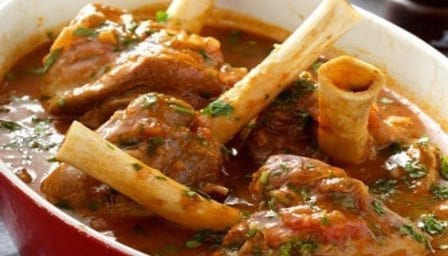 Morocco is a country known for its unique and flavourful cuisine. There, it is considered impolite to refuse to eat meat when offered at a meal. Considered as the largest exporter of sardines in the world, traditional Moroccan cooking is a blend of cuisines and customs from around the world. Their national dish is couscous which basically is granules of semolina steamed over a pot filled with meat and vegetable stew. The most common beverage is mint tea served with sugar.

Moroccan cuisine comprises an incredible blend of spices, flavour combinations, and beautifully textured dishes. This country has adopted the abundance of globally imported spices from traders spread all across. The vast array of spices available in local Moroccan markets has seeped its way into its dishes which are layered with sweet, spicy, earthy and bright flavours. A typical Moroccan lamb shanks recipe comprises a heady mix of the following spices, freshly ground to extract their aromatic properties:

A typical ingredient in many spice blends, cumin has also been used medicinally in many parts of the world. It is considered the second most popular spice and comes from a small flowering plant. The brown and oblong shaped cumin seeds are actually the plant’s small dried fruits. Cumin adds a nutty and peppery flavour to foods and the essential oils they contain, release a warming effect on your taste buds.

These brown seeds contain essential oils in their cavity which release flavour during the cooking process. Coriander seeds are harvested from the coriander plant and are known for their health benefits. It is quite a popular spice owing to its distinct aroma.

Black peppercorns are a common spice in most households. Ideally, buy whole peppercorns and crush them at home. This spice adds a distinct flavour to the Moroccan lamb shanks recipe. Store them in a cool, dry, and dark place.

Made from dried and ground peppers, paprika adds a splash of bright red colour and works well as a flavour enhancer too. It is loaded with essential vitamins, minerals, and antioxidants that are very beneficial health wise. Paprika should only be lightly cooked to release its enticing aroma. It tends to get bitter when left on heat for longer than required.

Cinnamon is found both in stick and powder form. The former is generally added directly to hot oil at the start of the cooking process to extract maximum flavour. Cinnamon powder is usually sprinkled over the star ingredient of the dish so that it catches the aroma of this versatile spice, popular amongst most foodies.

This flavourful delicacy is best relished at leisure in the company of loved ones.