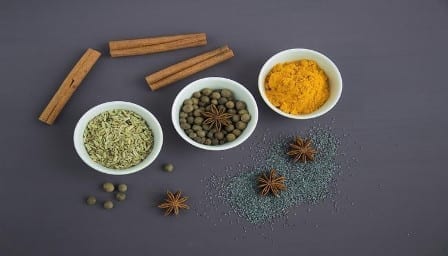 According to a traditional theory, the Chinese developed the 5 spice powder to engage all the five taste buds that include sweet, sour, salty, bitter, and pungent. Even though it is not known how exactly this culinary powder originated, the fact is that is continues to add flavour to meals across various cultures. This powder can really make your cuisine taste better and balance the aromas.

So if you are planning to add five spice powder to your culinary creations, then you need to what it encompasses and how it can enhance your food by harmonizing various tastes.

But before we get into it, let us understand what five-spice powder actually means.

Culinary experts reveal that a standard recipe of this powder includes Szechuan peppercorns, fennel, cinnamon, ground cloves, and star anise. Here are some unique taste attributes of each of these ingredients that make the five-spice powder as we know it today.

Cinnamon has a sweet taste but it is not like sugar. It has a spicy undertone that adds a little pungent flavour to it.

This is not exactly a pepper but has a unique taste of its own that makes your food more flavourful. Extracted from red-brown berry, the plant is obtained from spiky ash bush that adds some serious aroma to the food. This fragrant spice not only engages your sense of smell with its spicy fragrance but also leaves your tongue slightly numb from its taste. Just two-three bites later, you will be able to identify the taste of ginger and anise that eventually taste salty, sour, and hot.

Ground cloves add a pungent taste but with a sweet after taste.

Some say that star anise tastes a bit like licorice but has a slightly bitter tinge in its taste.

Also like anise, fennel is slightly less pungent with a sweet undertone and minus the licorice aftertaste.

How to Use Chinese Five Spice?

You can use this powder in your dishes to add an explosive taste of spices. They taste the best with meat, fish, or poultry marinades. It is mostly used as a dry rub for maximum flavour. It is particularly suited to pork dishes that contain pork belly. You can marinate it in five-spice powder and other seasonings of your choice.

In the west, the steamed dish is replaced with stir-fried versions of pork tenderloin or pork chops. Stir-frying the ingredients offers a fragrant mixture and a delicious taste.

You can also add a bit of oil and vinegar and use the steak on the grill. Some even add to the sauce for enhanced taste.

This amazing spice mix is helpful not just for food, but also for drinks. Here are the top uses of this mix:

One can also use the mix to make pickle brine, which is commonly used in several Asian households to preserve fruits and vegetables. No vegetarian entrées or snacks will ever taste bland with the addition of the mix. You will be able to prepare several sauces as well as marinades for vegetarian items with it.

Chinese five spice is very potent, and so it must be used only in moderation. Its potency can be kept intact when it is used in small amounts and is kept in a cool and dark place. It can completely alter the flavour of the dish you plan to serve.

This can be understood from the fact that even though salt is not part of it, the mix is still able to provide a salty flavour. You can increase the saltiness of a dish by simply adding the five spice blend, which behaves as salt.