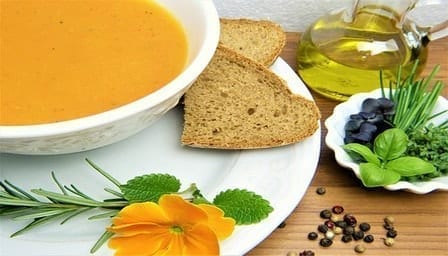 Soups made at home are packed with flavours and loaded with nutritious ingredients. Apart from being comfort food, this one pot of goodness is a soothing companion on a cold dreary day. A bowl of hearty soup helps lift your spirits and does not involve much prep work.

To build flavours for your soup, begin by sweating the base ingredients. Generously season with herbs and spices and for the liquid element, use broth instead of plain water. The spices incorporated into a creamy Moroccan carrot soup are:

Being a versatile ingredient, this spice is used in varied forms. Fresh and powdered ginger is used for making savoury dishes while dried ginger is ideal for sweet recipes. When squeezed, fresh ginger releases an aromatic juice which is also added to uplift beverages like tea. Its health benefits include relieving pain, motion sickness, nausea and loss of appetite.

A common spice, cumin helps regulate blood sugar and aids digestion. Whole cumin should be added to hot oil and allowed to crackle before adding the remaining ingredients. Cumin seeds when toasted emanate an earthy aroma as their natural oils get released. If overcooked, the seeds tend to get slightly bitter. These seeds are a rich source of iron, promote digestion and help treat inflammatory diseases.

To make coriander powder, grind lightly toasted and crushed coriander seeds. These seeds have an intense aroma and delightful flavour. Coriander is used in its fresh, whole and powdered forms. It has medicinal properties as it keeps a check on one’s cholesterol levels, helps tackle diabetes, eases digestion and facilitates hair growth. A pinch of this flavourful spice has been used as an essential condiment in savoury dishes for ages.

For a slight kick of heat, brightness and added flavour, chilli flakes are added to the Moroccan carrot soup. When sprinkled sparingly, red chilli flakes are a welcome addition to many recipes. They help bring out the flavour of the other ingredients just right and moderately spice the dish. In addition, chilli flakes help control weight, clear congestion in your throat and lungs, boost immunity and prevent stomach ulcers.

Known as a delightfully exotic spice, cinnamon adds a well-balanced depth of flavour to the soup. It has a pungent taste and smell and is known for its culinary and medicinal properties. Cinnamon adds a sweet aromatic flavour to every recipe and when consumed, it leaves behind a refreshing, warm, and comforting effect. It is also known to settle your stomach, improve blood circulation, digestion, and boost your metabolism.

Turmeric is the root of a tropical plant that is extensively grown in India. It has a bright yellow-orange colour along with a strong pungent taste. It adds colour and flavour to any dish. When making Moroccan carrot soup, you should use ¾ teaspoon of ground turmeric.

This red powder spice is made from dried red peppers. It is used for seasoning and garnishing a variety of dishes. The colour of paprika can range from bright red to deep red. It is an essential ingredient for dishes like soups, curries, and stews. When making Moroccan soup, you should add a half teaspoon of ground paprika to improve the appearance and flavour of your dish.

It is the dried and unripe fruit of a tree that is cultivated in the warm regions of Mexico and Central America. The flavour of this spice constitutes a combined aroma of nutmeg, cloves, and cinnamon. That’s the reason it is called allspice. The fruits are dried in the sun to make this spice. It can be used as a seasoning for many dishes around the world. You can enhance the flavour of your Moroccan soup by adding ¼ teaspoon of ground allspice to other ingredients.

Cloves have a highly intense flavour and scent. Use them in small quantities to experience the sweet taste. The intensity is much higher when using crushed cloves. Spice blends like ras el hanout, Chinese 5 spice, and allspice use cloves. Depending on which variant of the carrot soup you prefer, choose the appropriate spice blend containing cloves. If preparing the mix at home, use only a tad bit of clove powder, else the soup will have an intense and overpowering taste.

The nutmeg has a unique pungent aroma, and it tastes slightly sweet. Western countries use nutmeg, especially while baking cakes, meats, and vegetables. In the case of Moroccan spices like ras el hanout and allspice, nutmeg is one significant ingredient. The delicately spiced carrot soup gets an exotic aroma from the nutmeg.

This visually appealing and wholesome soup is served with a dollop of yoghurt. For that crunch element, sprinkle roasted chickpeas once served.

The best part of making soup is that it doesn’t take too long to prepare. Hardly, it takes five minutes to make a delicious and healthy dish that keeps everyone well-hydrated and well-fed for a period of time. Apart from that, there are several advantages of eating soups, especially Moroccan carrot soup. Let’s take a look at the following:

The fact that people choose a bowl of steaming hot soup in the winter is because it gives a boost to their immunity. Moroccan carrot soup offers several health benefits. It gives a boost to individuals’ immunity and helps them to fight cold and flu in the seasonal changes. Also, when people have illnesses, it can work as a great antidote too. However, it should be made in an ideal manner by adding proper vegetables. This carrot soup can be made either with carrots or pumpkin or both. The sweet and savoury tastes that come from the cinnamon, nutmeg, cardamom, ginger not only increase its taste but also make it healthier. So, it works as a perfect immunity booster in the long run.

2. It Can Be Made Instantly

Soups are the perfect starters. If anyone is having a housewarming party or having a group of people visiting their house, the ideal way to make a great impression would be to make some hot and tasty soup. These days, most people are caught up with a couple of activities in their daily lives; therefore, they can’t spend enough time preparing any special dishes when guests visit their house. But, one can still make a great impression by serving the piping hot and delicious soup.

It’s pretty obvious that people won’t have to spend a thousand dollars to make a great soup. Even it doesn’t need a long list of additional ingredients to make the soup tastier. One can simply add lemon thyme, fresh coriander, sour cream, salted sunflower seeds to make it healthy. Nowadays there are spice mixes available that can instantly make the soup even tastier. One can save their hard-earned money besides making a great impression on their guests.