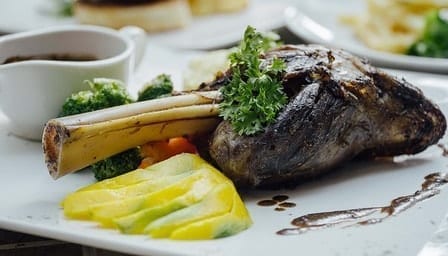 The holiday season is finally here and it’s time to whip out your aprons and the oven mitts! Your kitchen shall soon be attracting family members and guests alike with the rich aromas wafting from it that shall spell out deliciousness! Right from meaty stews and cherry pies to that perfectly roasted ham, you’ve got a jolly week of Christmas feasts ahead of you.

Interestingly, quite a few people are looking to introduce something exotic and enticing to their guests. If you’d like to do the same, you must begin with the Moroccan lamb shanks recipe. This article aims to please with accurate details of all the spices needed to make this dish this holiday season!

Any chef worth his salt shall confirm that the best way to extract maximum flavour from meat is to choose to slow cook it. This is best done over a low flame, which is the ideal way to avoid excessive evaporation. Using rich spices like cinnamon help you seal in the flavour of the meat. Using a whole cinnamon stick lets you remove the stick before you plate up and yet give it the perfect hint of cinnamon!

While there are no red chillies or green chillies in this dish, it gets its heat from black pepper.

A Sprinkling of Aromatic Ground Coriander

When you are making a preparation that is as aromatic yet pungent as the Moroccan lamb, you must introduce ground coriander. A beautiful spice, it can wonderfully flavour the gravy and even makes its way to the meat.

A Spice Mix with Cumin Seeds and Fennel Seeds

Clubbed together, these are best used as a spice mix, so that neither overpowers the taste and scent of the other. These spices are key to the making of Moroccan-style braised lamb shanks.

You can use minced garlic as a marinade or rub on the meat or even choose to add it when you cook the meat long to flavour the sauce or gravy around it.

You may have heard of the spicy, hot red paprika. However, its milder and sweeter cousin is a critical ingredient in the Moroccan lamb shanks recipe. It adds a delectable flavour that cannot be lent by any other component. This is precisely why you must source authentic spices for your curries and stews.

Conventionally, Moroccan gravies always have one element of dried fruit. This is added to the gravy towards the end of cooking it. This is specifically why it is necessary that your spices be measured perfectly to ensure that the dish is balanced rather than an excessively sweet one.