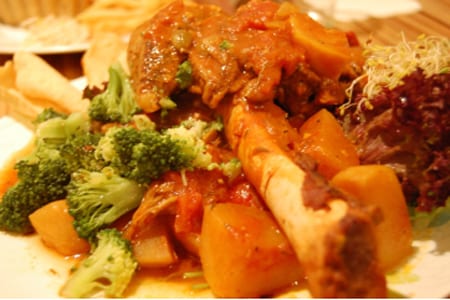 The Best Moroccan Lamb Shanks Recipe is the perfect option for the dinner menu if you are pressed for time and want to serve something savoury. This popular dish is left to cook slowly while you do other things. What you get after hours of toil and labour is a delicious meal that your guests won’t be able to stop raving about.

The best way to prepare the lamb for this recipe is to cover it in clingfilm and marinate it in the fridge for up to 24 hours. This will allow the spices and flavours to seep in, giving you an aromatic and rich dish. You can accompany it with couscous and supplement it with dried fruits and nuts for a wealth of taste.

The vast array of spices available in local Moroccan markets has seeped its way into its dishes which are layered with sweet, spicy, earthy and bright flavours. A typical Moroccan lamb shanks recipe comprises a heady mix of the following spices, freshly ground to extract their aromatic properties:

A typical ingredient in many spice blends, cumin has also been used medicinally in many parts of the world. It is considered the second most popular spice and comes from a small flowering plant. The brown and oblong-shaped cumin seeds are actually the plant’s small dried fruits. Cumin adds a nutty and peppery flavour to foods and the essential oils they contain, release a warming effect on your taste buds.

These brown seeds contain essential oils in their cavity which release flavour during the cooking process. Coriander seeds are harvested from the coriander plant and are known for their health benefits. It is quite a popular spice owing to its distinct aroma.

Black peppercorns are a common spice in most households. Ideally, buy whole peppercorns and crush them at home. This spice adds a distinct flavour to the Moroccan lamb shanks recipe. Store them in a cool, dry, and dark place.

Made from dried and ground peppers, paprika adds a splash of bright red colour and works well as a flavour enhancer too. It is loaded with essential vitamins, minerals, and antioxidants that are very beneficial health-wise. Paprika should only be lightly cooked to release its enticing aroma. It tends to get bitter when left on the heat for longer than required.

You can use minced garlic as a marinade or rub on the meat or even choose to add it when you cook the meat long to flavour the sauce or gravy around it.

Cinnamon is found both in stick and powder form. The former is generally added directly to the hot oil at the start of the cooking process to extract maximum flavour. Cinnamon powder is usually sprinkled over the star ingredient of the dish so that it catches the aroma of this versatile spice, popular amongst most foodies.

Let us now discuss the recipe that you can prepare for your next dinner get together.

Preheat the oven to 325°F. Mix paprika, coriander, turmeric, cinnamon, and 1 tsp. pepper in a large bowl. Add lamb shanks and rub the spices using your hands. Take a large frying pan and add olive oil. Transfer the spiced lamb shanks to the pan and wait until mildly brown. Perform the same steps with the remaining pieces of lamb shanks and then transfer them to the casserole dish with a lid.

In the next step, take a mini blender or a food processor and place onion, garlic, and ginger in the mixer to finely mince it. Add a tbsp of olive oil to the pan, add onion to the mixture, and sauté it for at least 3-4 minutes until it softens. Wait for the spices to cover the onions completely before moving onto the next step.

Pour a bit of stock into the pan, stir to combine, and turn over the lamb shanks. Add the remaining stock along with honey and tomatoes, stirring the mix until all the ingredients have combined evenly. Cover the lid and let it slow cook for at least 2 ½ hours until the lamb shanks are tender and the meat is ready to fall of the bone.

Squeeze half a lemon to add a zingy taste. Serve the lamb shanks in a wide bowl with couscous.

The Moroccan lamb shanks is a slow-cooked recipe in Moroccan spices until the meat is soft and the spices have all mixed properly. If you still have the sauce left after serving all the pieces, you can even drink it like soup!