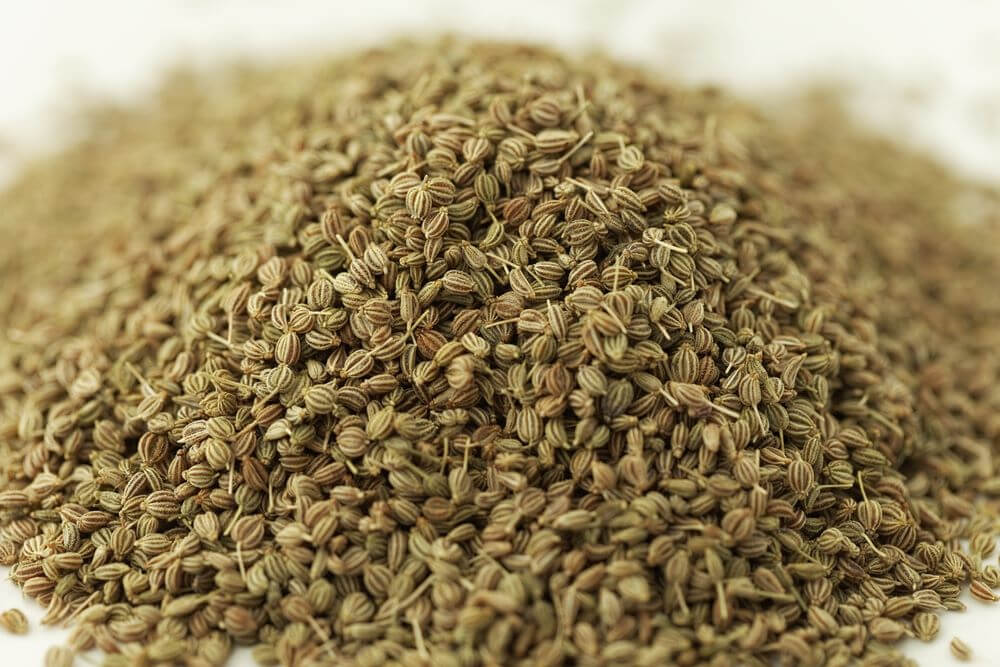 What are Ajwain Seeds?

Ajwain Seeds (pronounced uj-wine), also known as Carom Seeds or Bishop’s Weed, are seed-like fruits used in Indian cuisine as part of a spice blend. Rigid and dark green in colour when dried, Ajwain Seeds are similar to fennel and cumin seeds in look and similar to thyme in fragrance. Originally, they were harvested and pressed into ajwain oil to be used in the Indian herbal medicine practice Ayurveda for the treatment of ailments like common colds, post-partum nursing for new mothers, and eventually to aid in digestion when introduced into cooking. You can shop for them here. Where are they from?

Much like its spice cousins coriander, cumin, and fennel, Carom belongs to Apiaceae, also known as Umbelliferae, plant family. With its fruit-like seeds and feather-like leaves, the Ajwain plant was first discovered in Persia and Turkey. From there, it spread to India and is now also grown in the Middle East and North Africa – it is now cultivated in most of the sub-continent.

Other names Ajwain can be referred to are Ajowan seeds, Ethiopian cumin, and Carom seeds or bishops weed. With sweet yet bitter notes and a strong flavour, Ajwain seeds have a similar flavour to fresh oregano, combined with the thyme-like scent from the thymol compound in them, the spicy bite of cumin, and the licorice taste of anise. Their flavour is earthy with a hint of fresh mint and is best described as spicy and hot with a sweet after taste. Its flavour is pungent, which means a little goes a long way, so only a few seeds are needed at a time to emit their flavour.

How to use them

In Indian cuisine, Ajowan is predominantly used to flavour pastries and bread-like samosas, parathas (flaky flatbreads), and roti. It’s also commonly used as a seasoning for potato curry dishes and to make a tadka. Tadka, also known as tempering, is the cooking process of warming butter, oil, or ghee until very hot and adding in whole spices to fry and create a ‘chaunk’. This chaunk is then used as a finishing garnish for dishes like dahl and pakoras.

When cooking dishes high in fats or starch, Carom seeds are best added towards the end of cooking. Their fresh, bitey, herby flavour cuts through the rich flavours. To bring out their more anise-like flavours and subdue their thyme-like herbiness, they can be cooked for a longer period of time. Due to its high levels of thymol, Ajwain Seeds have long been used in the ancient Indian medicinal practise Ayurveda for its health benefits. The seeds are gently crushed and used in medicinal pills as a remedy for ailments like heartburn, indigestion, and kidney and lung problems. It can also be applied topically to treat skin issues like acne. To help nursing mother produce milk, Carom seeds are steeped in milk or other liquids for drinking.

To relieve symptoms of the common cold, add 1 tablespoon of ajwain to a bowl of boiling water and inhale its steam. Restorative and invigorating.

To replicate the earthy and bitter yet sweet flavour of Ajowan Seeds, you can use substitutes like: