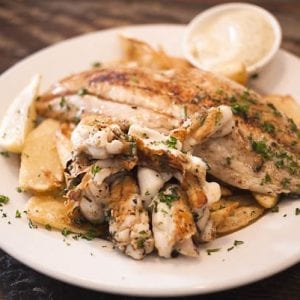 A Middle Eastern twist on an English pub classic. With the wonderful flavors of our Middle Eastern Za’atar on succulent flaky fish, golden crunchy hand-cut chips, and a zesty Sumac tartare, I can guarantee this homemade gem is much better (and more wholesome) than the local takeaway!

Serve with a side garden salad or rocket dressed in lemon and a glass of crisp, cold white, and enjoy!

*The Sumac tartare is just an added extra but you can just use a regular tartare, aioli, or omit completely if you like.